Have you ever gone swimming in the middle of the ocean -whether it’s to snorkel, scuba dive, or simply to take in all that the ocean has to offer? I remember the feeling over 10 years ago, where a small boat took us far out in the Atlantic Ocean away from the coast and we were told to literally jump right out of the boat into the ocean to take a swim around.

While this ended up being one of the most incredible experiences, I remember being slightly terrified right before I jumped in. What would be waiting for me beneath the waters? Would there be things I wasn’t prepared for? Would I encounter any ocean creatures that I’ve never seen before?

All these questions raced through my mind, but without another second of hesitation, I jumped. Splash. And then I was in it -the ocean, just like that. I was fully immersed, all of the ocean surrounding every inch of me. My fears were quickly replaced with curiosity and awe of the beauty and vastness of the ocean, the ocean in which I was so unfamiliar with, so unknowing of how life worked down here.

Everything from seeing a new species of vibrant fish, the delicate corals, the endless shades of blue, to even the brisk temperature of the ocean water -with each new discovery, I was initially taken aback by it because it was unfamiliar, but then I welcomed it. I felt like I was an active participant in the ocean, yet also an observer watching from the outside, all at the same time.

This experience of my first time swimming in the deep depths of the ocean reminds me greatly of my time in Thailand. Unlike Taiwan which was familiar and home to where my roots, this was my first time visiting the country of Thailand -a place where the culture, norms, history, and people were completely unbeknownst to me. Right when I stepped out of CNX airport into the humid air of the Chiang Mai streets to hail a taxi, I felt like I was diving into the ocean all over again. A place that had so much depth, beauty in the details, a spectrum of colours, sounds, smells, and unexpected nuances – I was now surrounded by it all without another moment to think about it. Splash. 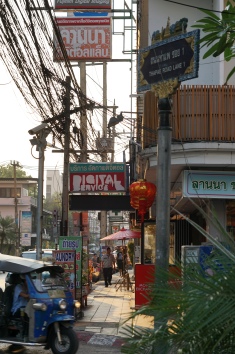 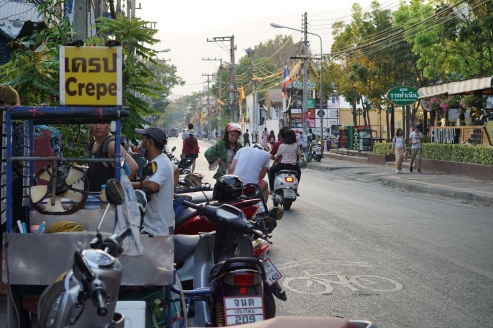 I thought I had done pretty extensive research about Thailand before my trip, but nothing could really prepare me for truly experiencing the streets and lifestyle in person. While the busy streets and strong motorbike culture reminded me of Taiwan, there was something about Chiang Mai that made it so distinct and different from anything I’ve ever come across. Chiang Mai is one of the largest cities in Thailand, yet while it is very busy, each resident carries a very laid-back, carefree aura about them. It feels as if there’s no sense of time or a need to rush as street vendors take their time cooking and talking to their friends and taxi drivers take a nap in their tuk-tuk under the blaring sun. 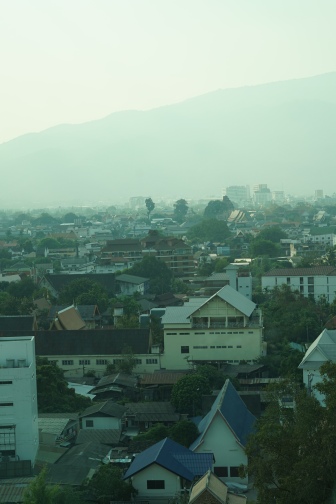 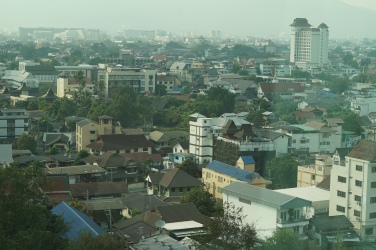 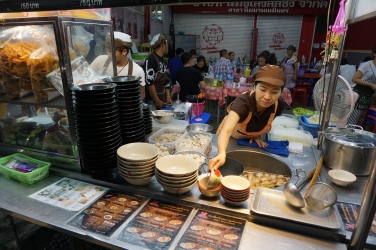 Buddhism is the predominant religion in Thailand, accounting for over 90% of the country’s population. And with that, the Buddhist culture is very apparent in Chiang Mai. There are a lot of Buddhist temples in Chiang Mai, would be an understatement. There is absolutely no shortage of the gilded, vast structures -with every corner you turn, there’s a new temple to explore. I feel like you could spend a week just going through the various temples in Chiang Mai and you still wouldn’t be able to get through it all. Within each temple (“wat“, as they call it in Thailand) lies an endless amount of history with many of these structures built before the 14th century. 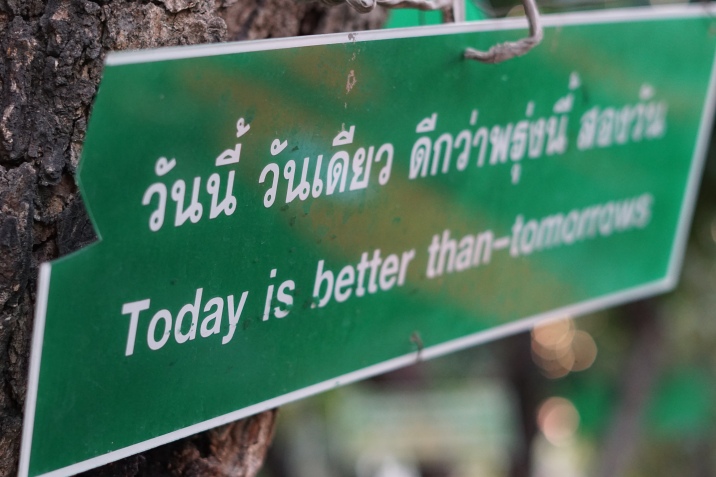 As I dove deeper into Chiang Mai, one of my favourite things to observe was the Buddhist monks, whether it was them meditating, interacting with every day people who had come to pray,  or even just doing mundane tasks around the temple like sweeping the roof -it was all so new and eye-opening to me, seeing a religion foreign to me that is so deeply valued and respected, permeating through an entire city. Being from North America, which is much more liberal, multiculturalism and a de-emphasis of religion is widely practised. I was in awe of not only how homogeneously spread the people’s beliefs were here in Thailand, but how important of a role religion has on how people lived their lives. 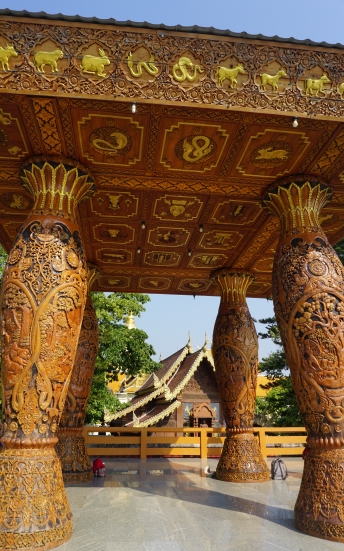 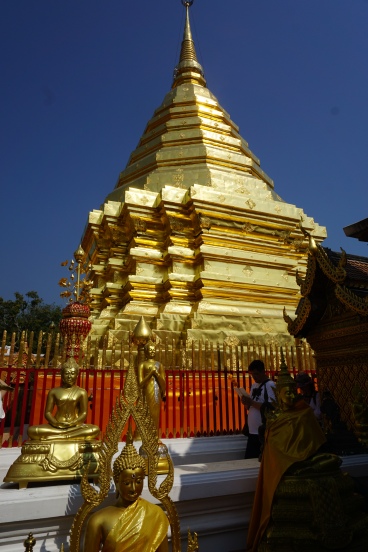 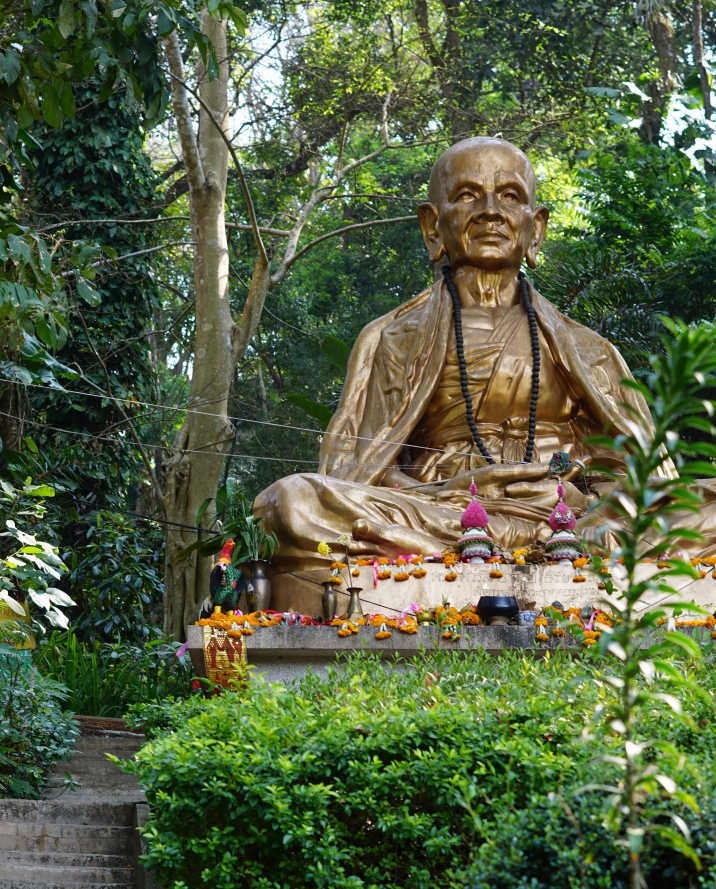 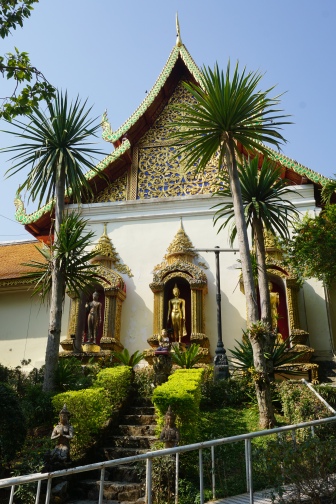 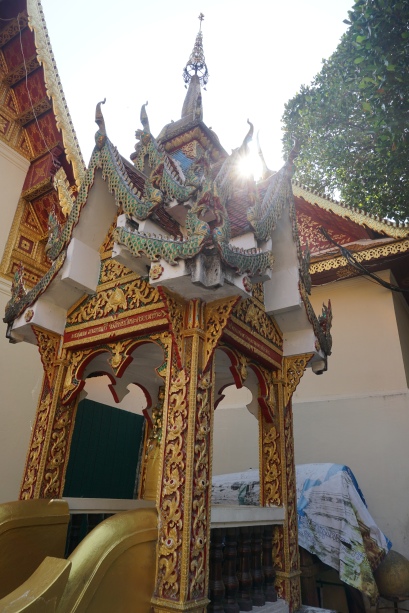 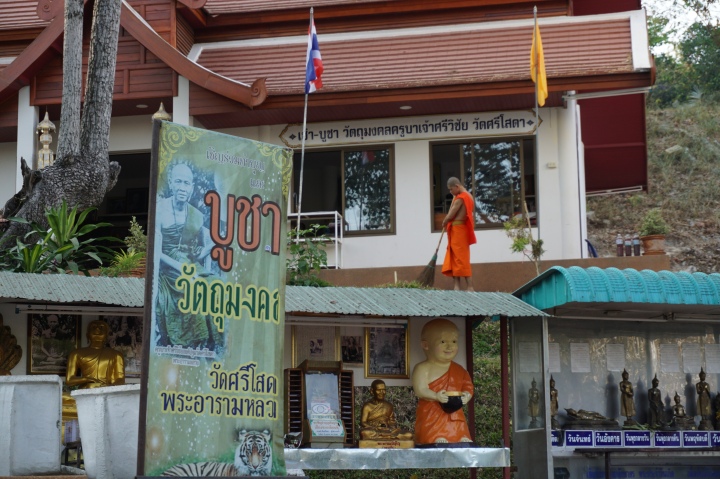 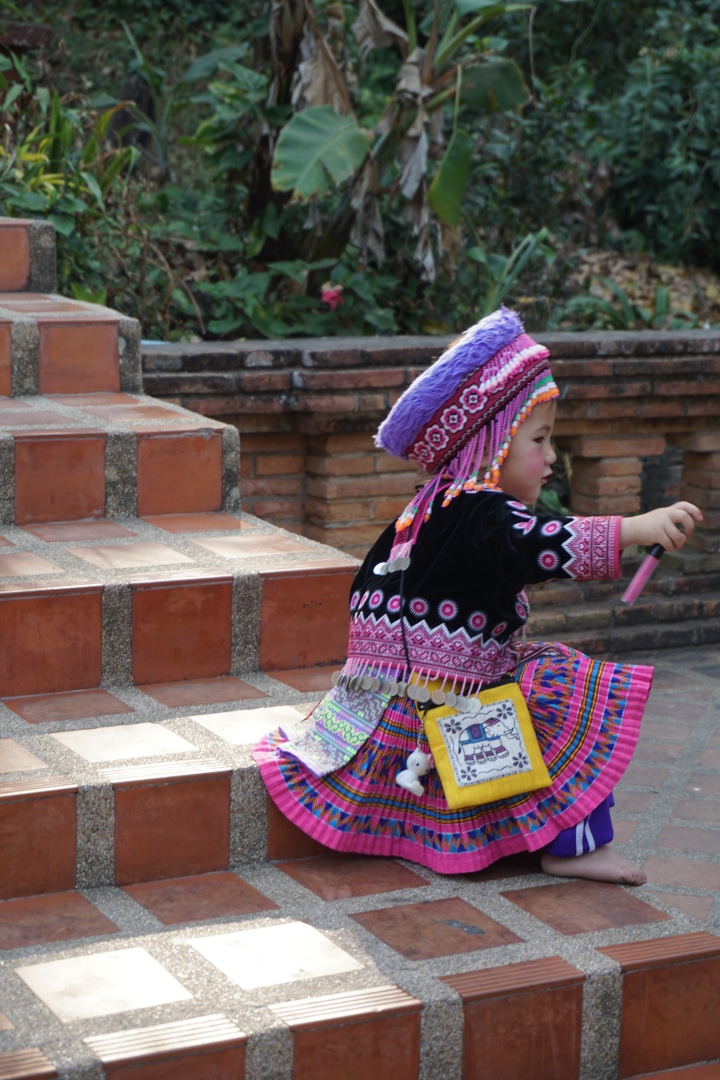 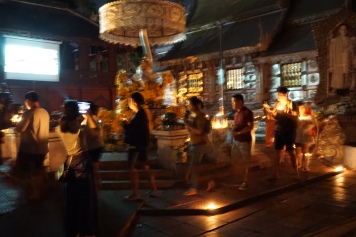 If I were to visit Chiang Mai again or Thailand for that matter, something I would definitely do is to talk with the local people more and maybe find someone who could not only show us around, but possibly explain the history of the temples, Buddhism, and lifestyle more to me.

It was not only an eye-opening experience being immersed into a completely foreign culture and religion, but a mind-opening one too. It can be so easy to get caught up and stuck in the routine values, proprieties, and norms of North American culture back home for so long that you start to think this is the only and right way to live. When you quickly glance at or hear about how another culture does things a certain way, it can become instinct to be shocked, turned off by, laugh at, or completely dismiss their lifestyle simply because it’s not what we’re used to.

And that’s why I think travelling can be so important in a time like this. Through my time of having difficulty reading road/store signs, hearing Thai people speak so comfortably in their native tongue, and watching monks lead people around the temple at night chanting and holding candles, it exposes me to a way of life that is not of my own and is something that is completely outside of my understanding, and reminds me that my own lifestyle is not the only one that exists and is certainly not the most superior one.  It helps break down that instinctual judgment we have developed from living in one dominant culture for so long, and helps open your mind to a beautiful culture that we could all learn a few things from.

This site uses Akismet to reduce spam. Learn how your comment data is processed.